Nairobi (CNN)The Ethiopian government has formed a committee to negotiate with forces from the Tigray region, Prime Minister Abiy Ahmed said in a televised speech to parliament on Tuesday.

The committee has been “studying the preconditions and how the negotiations will go,” he said.
The committee will be led by his Deputy Prime Minister, Demeke Mekonnen, and is expected to submit a report outlining the details to Abiy within 10 to 15 days.
“We are committed to peace be it with TPLF (Tigrayan People’s Liberation Front) or any other entity who seeks peace,” he said.
On Tuesday night, Debretsion Gebremichael, president of TPLF, said his group was “prepared to negotiate for peace consistent with fundamental principles for human rights, democracy, and accountability,” in an open letter posted to Twitter. 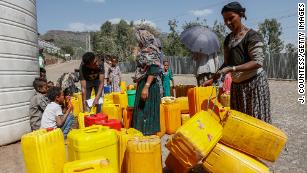 Tigrayan forces say they are withdrawing from Ethiopia’s Afar region
“We shall participate in a credible, impartial and principled peace process,” the letter read, adding that the group maintains that any peace talks must be held in Nairobi, Kenya with mediations led by Kenyan President Uhuru Kenyatta.
“Our position remains that the peace process requires the engagement of a range of international partners, under the leadership of the Government of Kenya. Among those partners are the United States, the European Union, the United Arab Emirates, the United Nations, and the African Union,” Debretsion wrote.
Once the federal committee submits the report, and the Tigrayan forces put forth their preconditions, an announcement will be made regarding peace talks between the two, Abiy said.
The development marks a significant step towards peace negotiations between the two forces which have been locked in a conflict for over a year and a half that has seen thousands killed, left hundreds of thousands in famine-like conditions in Tigray and set a world record for displacements in a single year in 2021, according to the Internal Displacement Monitoring Center.